Thousands of local Teamsters members will have their pensions restored through an infusion of federal funds, five years after their benefits were cut by as much as 29%.

The changes will affect active and retired Teamsters who are covered by the New York State Teamsters Conference Pension and Retirement Fund. That includes about 3,900 retirees from Teamsters locals 264 and 449 in the Buffalo area.

The retirees whose benefits were cut also will receive retroactive payments, compensating them for the amount they missed out on over the past five years.

“It’s going to help a lot of people,” said Michael Wach, 64, a retiree whose pension was reduced by 29%, or $1,300 a month. Wach worked for Buffalo-area trucking companies and as a Teamsters leader before retiring.

Multiple companies pay into multiemployer pension plans. In the case of the New York State Teamsters Fund, UPS is the largest contributor. Eight Teamsters locals, including the two in Buffalo, are participants in the fund.

The New York State Teamsters Fund covers about 33,000 active and retired workers in the transportation industry statewide. The PBGC estimates benefits were reduced for 25,000 members, by an average of 20%.

Back in 2017, fund leaders warned that without the reductions, “our fund would almost certainly run out of money.” Retired workers’ benefits, with some exceptions, were cut by 29%, while active workers’ pension benefits were reduced by 18%.

Fund leaders at the time said multiple factors had led to the risk of insolvency: “historic market losses” in 2000 and 2008, an “exodus” of contributing employers, and the loss of a number of participating trucking companies through consolidation, shutdown or bankruptcy.

Advocates including union officials worked for years to find a way to help members restore their reduced pension benefits, said George Harrigan, principal officer of Local 449 and president of Joint Council 46. “This not only secures the future for the retirees but the active members,” he said.

Sen. Charles Schumer was outspoken on the issue of the reduced pension benefits and pushed for the solution being implemented.

“Teamsters and their families who rely on these plans could have lost the benefits they earned over a lifetime of work, through no fault of their own – putting their financial security, retirements and families’ futures at risk,” he said.

Plans call for the federal payment to be made to the Teamsters fund on Dec. 8, according to a letter from the fund’s leaders to members.

If that happens on schedule, the Teamsters members’ pension benefits on Jan. 1, 2023, will be restored to the level they were before the reductions took effect in 2017, the letter said. And makeup payments to cover the reductions imposed over the past five years would be made March 1. 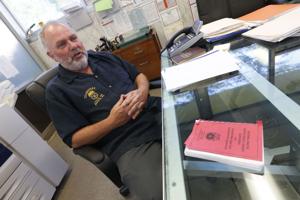