For Sarah Fleming, food inflation has doubled her grocery bill and made it more expensive to feed her Eden family healthy meals and snacks.

For Marcia Gliss, a widow and retired nurse on social security in Elma, higher food costs have made it harder to navigate her severe food allergies while getting the right nutrition.

Asantewa Moses, a working single mom in Buffalo, has had to juggle bills to buy groceries – which has resulted in her phone being turned off.

Stephanie Barmann, a separated working mother in the Town of Niagara, is thankful she received a pay raise designed to help keep pace with inflation – otherwise, she’s not sure how she would feed her five kids.

The cost of groceries increased 11.2% in September compared to last year, according to the Consumer Price Index from the Bureau of Labor Statistics.

In addition to paying the highest prices they have seen in four decades, consumers have had to watch out for things like “shrinkflation,” where manufacturers reduce the size of a product while keeping the sale price stable, effectively raising prices by giving consumers less for the same price.

Then there is “skimpflation,” where companies reformulate their products to use cheaper ingredients. It’s forcing consumer to make some difficult choices about what they eat, where they shop and how they budget. And that’s all while they brace for increased home heating costs on the horizon.

“The increase in food prices year-over-year far exceeds the average increase in prices across all areas,” said Charles Lindsey, a marketing professor at the University at Buffalo School of Management.

There are a few primary factors contributing to food inflation, he said: continued supply chain disruption, commercial transport worker shortages, the Russia-Ukraine war’s effect on input prices such as wheat and fertilizer, and recent droughts.

But the impact of those rising grocery bills is inescapable.

Moses has a daughter age 6, who has epilepsy, and age 17, who works. She is barely getting by with prices the way they are, and is scared to think what will happen if they get worse.

She breaks into tears when she talks about her fears for her children and for the future.

Even before inflation sent prices through the roof, Moses was scrimping and saving the best she could. She bought store brands, shopped at low-price grocers Save-A-Lot and Aldi, and knew how to stretch recipes to last longer.

“I struggled my whole life, so I knew what to do,” she said.

But now, she’s running out of corners to cut. Reluctantly, she has started turning to the bargain menus at fast food places. Though the cost of chicken has gone up 17.2% since last year, the price of a McChicken sandwich remains $1.59.

“Unfortunately, it seems like fast food is more affordable than going grocery shopping, which is terrible for our health,” said Moses, who works in customer service. “Chicken is almost like the new steak,” she said. “And hamburger – the price of hamburger is crazy.”

Moses works overtime and is looking for a second job. She applied for food stamps but was rejected because she makes too much money. A car accident during the pandemic forced her into financing a new vehicle at inflated prices so she could get to work.

“I’m buying Ramen and oatmeal instead of the things we enjoy because we gotta do what we gotta do,” Moses said. “We’re substituting things so we can be full for the night.”

Fleming is a compensation specialist at an aerospace company, her husband works in construction. Three of their four children live at home; girls ages 6 and 7 and a boy, age 14.

“My 14-year-old, I feel like he’s eating every minute that he’s awake,” she said. “Everything just keeps going higher and higher. I can’t just not feed my kids, so I do just end up paying whatever.”

But she has found herself being more selective when shopping. Sometimes that means having to say no to even the simple, healthy foods she wants her kids to eat – as was the case when the kids asked for a $10 bag of grapes recently.

To save on meat costs, she chipped in with family members and bought a quarter of a cow. She no longer orders out for things like pizza and wings and now makes them at home.

“I was contemplating making soup in the crockpot but I didn’t have all the ingredients. In order to get them all it would be like $40. I’m like, ‘What is the point? I’ll just get some cans and the soup won’t go bad because it’s in a can,'” she said.

Still, she’s spending roughly $250 per week at the grocery store.

“My job allows me to have that cushion but I couldn’t even imagine people that are making minimum wage and still trying to figure out how to buy all these groceries,” she said.

Gliss is a retired nurse on Social Security. She is allergic to dairy and beans, which puts many foods off limits and means she often has to buy pricey alternatives. She’s worried about gaps in her nutrition, especially when it comes to calcium and protein.

Instead of cow’s milk, she drinks fortified coconut milk, but that has doubled in price. She can’t afford oat milk, which is $3.49 to $3.79 a half gallon.

Beans, which are inexpensive and nutritious, are off the table. Eggs used to be a cheaper protein but have increased in price by 30.5%, according to the Consumer Price Index.

The soy-free, dairy-free bread she eats has gone up to $5.59 per loaf. The bags of frozen fruits and vegetables she used to buy for a $1 are now $1.59. She just finished the stash of plant-based butter in her freezer and is afraid to see what it will cost to buy more.

“It’s just getting harder,” she said.

Gliss doesn’t qualify for food stamps, but does get HEAP – help from the Home Energy Assistance Program. She’ll be getting a nearly 9% increase in her Social Security payments, but now she’s scared it might affect the help she gets to pay her heating bills, which are forecast to jump by 50% this winter.

She has been watching the Internal Revenue Service’s new income tax brackets, which are adjusted for inflation, and is hopeful it might save her some money – but only on next year’s taxes.

“A couple hundred bucks in your pocket is better than in somebody else’s,” she said.

Barmann is a machine operator at a plastics company and has 10 children, five of whom still live with her at home. Her boss instituted a $2 per hour raise to address inflation and she’s not sure what she would do without it.

But the news wasn’t all good. Later that day, Barmann found out her employer would move into the state’s Shared Work program. Because inflation has squeezed demand at the factory, workers will go from five days of work per week to four days and one day on unemployment.

Watching the news, she had been getting nervous about layoffs, but the state program is designed to help businesses avoid layoffs and retain workers.

It has been getting harder to accommodate her children with special needs and sensory issues, which can make them picky eaters. She has eliminated many of the special things they like, such as fruit snacks. She bought Kool-Aid drink drop-ins to cut back on the amount of milk they drink. She packs the kids’ leftovers for her own lunch the next day. And she has had to cut down on how much she uses eggs.

“When things would get a little hard before and you’re just making it at the end of the week, you could go buy eggs. Now you’re looking at $4 or $5 a dozen. It’s crazy,” she said.

She does meatless meals twice per week. While she’s not thrilled with what she’s feeding them, the kids are usually pleased.

“Yesterday we did grilled cheese with tater tots,” she said. “The kids love it, but they don’t know it’s because everything else costs so much.”

She has been setting money aside each week “like turkey layaway,” for the holiday meals to come. Her children’s entire school district gets free breakfast and lunch, which is a godsend, she said. And while she still makes a few things from scratch, such as hot cocoa, it doesn’t save money like it used to.

“So obviously kids are getting more processed food now. Not just my kids, everybody’s kids, because it’s cheaper to buy it that way,” she said.

No end in sight

Food prices will eventually come down, slightly and slowly, Lindsey predicts. But prices will likely never go back to where they were, even when circumstances return to normal, he said.

“I think it’s more practical or realistic to think that ultimately we’ll see a combination of modest price declines and then price stabilization,” he said. 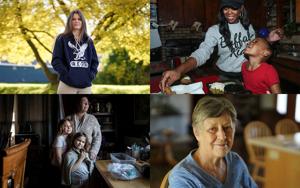